During 2018, gay, bisexual, and other men who have sex with men (MSM) accounted for more than two-thirds (69.4%) of all new HIV diagnoses in the U.S. In addition to their very high HIV diagnosis rates, MSM have lagged behind some other groups in rates of linkage to care and viral suppression, according to a new CDC report published in the Morbidity and Mortality Weekly Report. The percentages of MSM who were linked to care within 1 month (80.8%) after HIV diagnosis and virally suppressed within 6 months (68.3%) of diagnosis were below national targets for these measures.

To shed further light on trends in these outcomes, CDC researchers analyzed National HIV Surveillance System data from 2014 to 2018. They found that, while the total number of HIV diagnoses among MSM decreased 2.3% per year, there were significant disparities by race/ethnicity and age. In particular, the rates of HIV diagnosis did not significantly change among either Hispanic MSM or among young MSM between 13 and 19 years old.  Furthermore, HIV diagnosis rates actually increased 2.2% and 2.0% per year among Black and Hispanic MSM 25 to 34 years old, respectively, and were highest in absolute count among Black MSM.

“These findings, albeit promising, warrant intensified prevention efforts for Black, Hispanic, and younger MSM,” according to the CDC researchers. “Providers’ implicit racial biases toward Blacks and Hispanics often promote treatment nonadherence, which inhibits viral suppression. Therefore, interventions might need to address systemic racism and concomitant racial biases within health care systems. CDC encourages use of interventions that address social determinants of health that underlie the high risk for HIV infection among MSM of all races/ethnicities and ages. Such interventions might help prevent HIV infection and eliminate racial/ethnic disparities in HIV infection among MSM.” 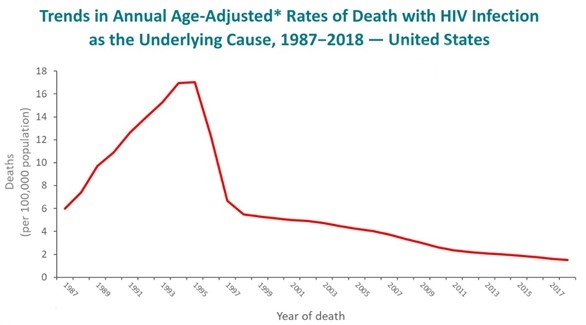 CDC’s new slide set, HIV Mortality 2018, provides a detailed analysis of trends in the rates and distributions of U.S. deaths in which HIV infection (including AIDS) is the underlying cause. The 27 slides in the set summarize mortality data compiled by the National Center for Health Statistics from death certificates from all 50 states and the District of Columbia for the years 1987-2018. The slides include breakdowns in death rates and trends over time by sex, age group, annual median age at death, race/ethnicity, state and region, and comparisons to the leading causes of death.

“After rapidly increasing since the 1980s, the annual rate of death due to HIV infection peaked in 1994 or 1995 (depending on the demographic group), decreased rapidly through 1997, and continued to decrease much more slowly thereafter,” according to CDC. Nevertheless, HIV infection continues to remain among the 10 leading causes of death among persons 25 to 44 years old, particularly among Blacks/African Americans. In recent years, the proportion of persons dying of HIV-related causes have been increasing in the following groups:

During Fiscal Year (FY) 2020, the U.S. Department of Health and Human Services (HHS), through the Health Resources and Services Administration (HRSA), awarded a total of about $2.24 billion in Ryan White HIV/AIDS Program (RWHAP) grants. These grants went to a wide variety of recipients, including states, counties, cities, and local community-based organizations. “This funding supports a comprehensive system of HIV primary medical care, medication and essential support services vital to improving the health quality of more than half a million people with HIV in the United States,” according to HHS. Here is a brief summary of the FY2020 awards made under the different parts of the RWHAP:

Part A: Fifty-two metropolitan areas received grants totaling about $627 million to provide core medical and support services for people with HIV. These grants were awarded to 24 eligible metropolitan areas and 28 transitional grant areas that had the highest number of people with HIV and AIDS and that were also experiencing increases in HIV and AIDS cases and emerging care needs.

Part B: A total of about $1.3 billion was awarded to 59 states and territories to improve the quality, availability, and organization of HIV health care and support services and to fund the AIDS Drug Assistance Program (ADAP). Sixteen states also received Emerging Community grants based on the number of AIDS cases reported during the most recent five-year period. In addition, 31 states and territories were awarded about $10 million in Part B Minority AIDS Initiative grants.

Part D: A total of about $70 million was awarded to 115 local community-based organizations to provide family-centered comprehensive HIV care and treatment for women, infants, children, and youth with HIV.

Part F: A total of about $68 million was awarded to support clinical training, oral health services, quality improvement, and the development of innovative models of care through several different programs. These awards included: $12.6 million for dental programs; $30.5 million in support for the AIDS Education and Training Centers (AETC) Program; and $25 million to support the RWHAP Special Projects of National Significance (SPNS) Program.

“HRSA’s Ryan White HIV/AIDS Program plays a pivotal role in improving health outcomes for Americans with HIV and has helped lay the groundwork for our initiative to end the HIV epidemic by 2030,” noted HHS Secretary Alex Azar. “More than $2 billion in grants through the Ryan White HIV/AIDS Program in 2020 are helping to continue the program’s incredible track record of viral suppression that saves lives, keeps communities healthy, and slows the spread of the virus.”

The National Institutes of Health (NIH) recently awarded about $10 million to support implementation science research that will advance the goals of the federal Ending the HIV Epidemic initiative. The new awards provide one to two years of supplemental funding to 17 of the 23 NIH Centers for AIDS Research, as well as six AIDS Research Centers in the National Institute of Mental Health. Some of the new awards support ongoing efforts to develop locally relevant plans for diagnosing, treating, and preventing HIV in areas with high rates of new HIV diagnoses, according to NIH. Other awards will fund new one-year projects, including seven projects designed to reduce barriers to the use of pre-exposure prophylaxis (PrEP) among cisgender heterosexual women.

KFF Analyzes Health Coverage and Outcomes Among People with HIV

In the years since the implementation of the Affordable Care Act (ACA), the percentage of nonelderly people with HIV who were uninsured declined from about 18% to just 11% in 2018, according to a new issue brief from the Kaiser Family Foundation (KFF). While the overall rate of uninsurance is now similar for people with HIV and the general population, there are substantial differences in the type of coverage they rely on. In particular, Medicaid is the single largest source of health coverage for nonelderly persons with HIV, accounting for 40% of coverage, compared to just 15% for the general population.  In contrast, a much lower percentage of people with HIV are covered by private insurance than in the general population (35% versus 56%).

“The main driver of coverage increases for people with HIV has been the ACA’s expansion of the Medicaid program,” according to KFF. Adults with HIV living in states that have implemented Medicaid expansion are significantly more likely to be covered by Medicaid (46% versus 30%) and less likely to be uninsured (6% versus 20%), compared to those living in states that have not expanded Medicaid.

KFF also found that the rates of sustained viral suppression among persons with HIV varied by payer, and were higher among persons with private insurance or Medicare, compared to the uninsured. “Viral suppression among those with Medicaid was not significantly different from the uninsured, a finding that could reflect the equalizing role of the Ryan White Program for the uninsured and lower incomes among individuals in these coverage groups,” according to the KFF brief. “Additionally, those with Ryan White support were significantly more likely to have sustained viral suppression compared to those without, regardless of payer.”

Last month, a second, extensively updated edition of the National HIV Curriculum (NHC) was launched online.  The NHC is an AIDS Education Training Center Program led by the University of Washington and funded by the Health Resources and Services Administration (HRSA). With the posting of the second edition, there is a new 3-year continuing education (CE) accreditation period. This means that registered users can earn CE credit by completing lessons in the second NHC edition even if they had previously earned CE credit by taking lessons from the first edition.  This second edition offers a total of 97 free CME/CNE/CE in the follow course modules:

The Latino Commission on AIDS (LCOA) recently published its National Hispanic/Latinx Health Policy Agenda: 2020-2024, which addresses HIV, viral hepatitis, sexually transmitted infections, substance use, mental health, and other critical health issues. The 36-page report summarizes the disproportionate impact of these health issues on Hispanic/Latinx communities, and describes the rationale for developing a Hispanic/Latinx-focused policy agenda. LCOA then presents a series of recommendations for improving health outcomes, ensuring community participation in the development and implementation of effective health strategies, and eliminating health disparities.

“This health agenda will actively contribute to drastically reducing new HIV infections, improving the length and quality of the lives of persons living with HIV, and effectively address the related opioid, viral hepatitis, STI, and TB crises,” according to LCOA. “In doing so, this health agenda will dramatically reduce the overall costs in lives and health care spending.”

LCOA has also developed an HIV poster series around the 2020 theme of National Latinx AIDS Awareness Day: “Ending HIV is at your fingertips.” This theme – and the poster series – draw attention to the tools that are already available to help end the HIV epidemic.  “While we continue maintaining social distance and following preventive measures to respond to the COVID-19 pandemic, we ask everyone to do their part in the fight against HIV,” LCOA notes. This includes being tested for HIV, learning about HIV and its risk factors, considering the use of PrEP and condoms to prevent HIV transmission and, for people with HIV, adhering to HIV treatment to become and remain healthy.

“Live with Leadership” Events at 2020 USCHA

At the 2020 Virtual U.S. Conference on HIV/AIDS (USCHA) later this month, HIV.gov will host three “Live with Leadership” sessions in which key officials from the U.S. Department of Health and Human Services (HHS) and community leaders will discuss current and planned activities under the Ending the HIV Epidemic: A Plan for America (EHE) initiative.  The sessions, which will be held on October 19 and 20, will address the following topics: 1) the importance of the USCHA to the EHE; 2) updates from the community on EHE; and 3) an NMAC update from USCHA. Interested persons may submit questions to speakers before each event, at the following email address: EndHIVEpidemic@hhs.gov. The HIV.gov blog plans to provide details on how to access the sessions soon.