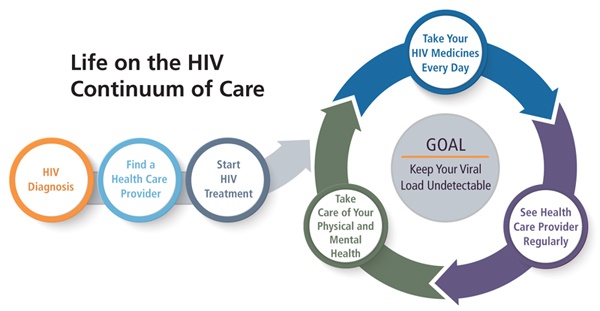 The HIV Continuum of Care

Several key findings from the latest report are summarized below and in an accompanying infographic. Unless otherwise stated, the highlights below are for the year 2018.

NIAID: Efforts to End the HIV Epidemic Must Address Comorbidities in Persons Living with HIV

“To effectively solve the global health crisis HIV represents, the comorbidities among persons currently living with HIV must be addressed simultaneously with collective efforts to end the epidemic of new HIV transmissions,” according to a recent JAMA editorial by Anthony Fauci, director of the National Institute of Allergy and Infectious Diseases (NIAID), and his colleagues. Even if the U.S. goal of reducing HIV transmission 90% in 10 years is achieved, there will still be at least one million people living with HIV (PLWH), and their medical needs – including comorbidities – must be addressed. PLWH have a disproportionately high risk of cardiovascular disease, chronic kidney disease, osteopenia, osteoporosis, liver disease, and cancer, according to the editorial. They may also develop some health conditions at younger ages than persons without HIV.

“Since the early years of the HIV epidemic, much has been accomplished, mainly due to the advent of ART [antiretroviral therapy],” Fauci and colleagues note. “However, much remains to be done in the identification, mitigation, and treatment of HIV-associated comorbidities that continue to be a challenge even in the era of ART. Additional research on the underlying pathogenesis of these conditions, randomized clinical trials to assess treatments, and a reduction in health care disparities must be prioritized moving forward. HIV-associated comorbidities also represent a significant economic challenge that must be addressed.”

An extensive body of research has firmly established that people living with HIV who achieve and maintain an undetectable viral load (VL) by taking ART as prescribed do not sexually transmit HIV to others. This approach of HIV treatment as prevention (TasP) is summed up in the phrase “Undetectable Equals Untransmittable,” or “U=U” for short.  Despite the overwhelming evidence concerning the efficacy of TasP and efforts of public health and HIV advocacy groups to promote the U=U message, the science of HIV viral suppression and transmission risk has not been well understood by the general public and key groups living with HIV.

To shed light on public acceptance and understanding of the U=U message, researchers from the City University of New York (CUNY) conducted an online cross-sectional survey from November, 2017 through September, 2018 to gather data from a total of nearly 112,000 men who have sex with men (MSM) in the U.S.  The CUNY researchers found that, overall, 54% of HIV-negative survey participants and 84% of participants with HIV correctly identified the U=U message as accurate. However, among participants who did not know their HIV status, less than half – 39% – believed the U=U message was accurate.

“A growing number of sexual minority men believe that U=U is accurate, but our data suggest that most still overestimate the risk of HIV transmission from an undetectable partner, which may be because people have trouble understanding the concept of risk,” noted Jonathon Rendina, the lead author on the study. “All published studies point to undetectable viral load as being the most effective method to date of preventing sexual HIV transmission, but most of our messaging has focused on the level of risk being zero rather than describing it in terms of effectiveness, which is the way we usually talk about condoms and PrEP.” 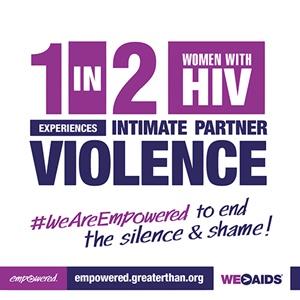 Women living with or at risk for HIV infection are disproportionately affected by intimate partner violence (IPV), which includes physical violence, sexual violence, or stalking by an intimate partner.  Researchers have found that women who have experienced IPV are at increased risk for HIV, and that IPV is associated with poorer treatment outcomes among women living with HIV. In consideration of the role that IPV plays in HIV risk, transmission, care, and treatment, the Kaiser Family Foundation (KFF) recently published an issue brief highlighting key statistics about IPV, the links between HIV and IPV, and policy initiatives and changes that address these challenges.

At some time in their lifetime, about one-third (36%) of all U.S. women have experienced intimate partner violence (IPV), Among women living with HIV, the rates of IPV are even higher – 55%. Compared to women in nonviolent relationships, women who have experienced IPV have a four times greater risk of contracting sexually transmitted infections, including HIV.  A nationally representative study found that one in five women (20%) living with HIV had experienced violence by a partner or someone important to them since their diagnosis. Among these women, half believed that the violence was directly related to their HIV serostatus.

The Affordable Care Act (ACA), which was signed into law in 2010, has several provisions that protect persons who have experienced IPV, including those living with HIV. These ACA provisions:

The brief also summarizes several other ongoing or planned initiatives that address the intersection of HIV and IPV. “Addressing trauma and violence experienced by women with and at risk for HIV aims to provide care and support in the immediate term, but in the longer term, may also be an important contribution in combating the HIV epidemic,” according to the brief. “Key policy changes, including those ushered in by the ACA and other opportunities outlined above, provide important vehicles for targeted interventions to address IPV in HIV-positive and at-risk women.”

NASTAD recently released a set of principles for drug pricing and access to support its mission to end the HIV and hepatitis epidemics. “Treatment and biomedical prevention advances – and the innovative research and development behind them – have revolutionized our ability to provide lifesaving interventions to millions of people living with, or at risk for, HIV, hepatitis C virus (HCV), and substance use disorders worldwide,” according to NASTAD. “Yet access to these prevention, treatment, and curative medications in the United States has been inefficient, expensive, and profoundly inequitable.” NASTAD’s drug pricing and accessing principles are designed, in part, “to help address the health disparities that have fueled disproportionate access to healthcare in the United States.”

NASTAD’s nine drug pricing and access principles include recommendations to:

Last month, the expert panels responsible for developing the Department of Health and Human Service (HHS) guidelines for HIV treatment and the management of opportunistic infections (OIs) updated three of their guidance documents. The Guidelines for the Use of Antiretroviral Agents in Adults and Adolescents with HIV have been extensively updated. The revisions include new guidance regarding:

The HHS Recommendations for the Use of Antiretroviral Drugs in Pregnant Women with HIV Infection and Interventions to Reduce Perinatal HIV Transmission in the United States have also been updated with revised guidance on:

Finally, the Varicella-Zoster Virus (VZV) section of the Guidelines for the Prevention and Treatment of Opportunistic Infections in HIV-Exposed and HIV-Infected Children has been updated to include new information about VariZIG, a drug used for post-exposure prophylaxis of VZV infection in persons exposed to that virus.

The January issue of the American Journal of Public Health (AJPH) includes several research articles and opinion pieces that describe in detail the Trump Administration’s proposed initiative, Ending the HIV Epidemic: A Plan for America.  The issue also features research on HIV trends in multiple geographic regions, patterns of HIV transmission, and best strategies for HIV treatment and prevention. For your convenience, we have provided links to the full text or abstracts of selected articles and opinion pieces below: