Inside This Issue: News on HIV incidence and prevention, HIV and viral hepatitis policy, educational resources, and conference news.

Progress in HIV Prevention Has Stalled, According to CDC Report

After several years of substantial reductions in new HIV infections, HIV incidence has stabilized in the U.S., according to Estimated HIV Incidence and Prevalence in the United States 2010–2016, a newly released surveillance report from the U.S. Centers for Disease Control and Prevention (CDC). The 89-page report provides the most recent data on HIV trends in the U.S. from 2010 through 2016, with breakdowns by year, gender, race/ethnicity, age, and transmission group. The data indicate that, after about five years of substantial declines, the total number of new HIV infections began to level off in 2013 at about 39,000 infections per year and remained at approximately that number through 2016.

“The concerning stabilization in new HIV infections has occurred because effective prevention and treatment are not adequately reaching those who could most benefit from them,” according to CDC.  Gay and bisexual men, African Americans, Latinos, and persons between the ages of 25 through 34 bear the greatest burden of new HIV infections in the U.S.

Gay and Bisexual Men: The total number of new HIV infections among U.S. gay, bisexual, and other men who have sex with men (MSM) remained fairly stable at about 26,000 per year during the period from 2010 through 2016 – accounting for about two-thirds of the nation’s total new infections.  However, there were substantially different trends in HIV incidence among MSM of different race/ethnicities and ages. In particular:

Heterosexual Women and Men: From 2010 through 2016, new HIV infections decreased about 17% overall among heterosexuals (from 10,900 to 9,100 per year). However, there were also substantial differences in HIV trends by gender and race/ethnicity.

Age Groups: New HIV infections increased by nearly one-third (11,500 to 15,000 per year) among young persons aged 25 to 34. New infections either decreased or remained stable among all other age groups. In particular, new HIV infections:

CDC has published resources to accompany the surveillance report.  These include a data table with year-by-year totals for new U.S. HIV infections both overall and among specific population groups, a 4-page fact sheet, and a set of 31 slides presenting data trends in a series of graphs and maps.

Late last month, NASTAD published the 2019 National HIV Prevention Inventory (NHPI) Survey Report. Like earlier iterations of the report published in 2009 and 2012-2014, the 2019 NHPI provides extensive information about the current state of HIV prevention throughout the U.S. The 91-page report is based on data collected from a survey distributed to major health departments (HDs), including HDs from 50 states, the District of Columbia, Puerto Rico, the U.S. Virgin Islands, seven local jurisdictions receiving direct funding from CDC, and the six U.S. Pacific Island jurisdictions. A total of 55 jurisdictions, representing nearly 98% of prevalent HIV cases in U.S. states and territories, responded to the survey.

The survey was organized into two main modules: funding and programming. The programming module included sections addressing: HIV prevention priorities; testing; HIV prevention and health systems integration; linkage to care; HIV planning; policy and structural initiatives; community engagement; condom distribution programs; behavioral interventions; syringe services programs; biomedical prevention; program integration; data to care and surveillance; and workforce development. The survey results for each of these areas are presented in the report.  For a brief summary of the NHPI’s key findings, see pages 4 through 9 of the report. 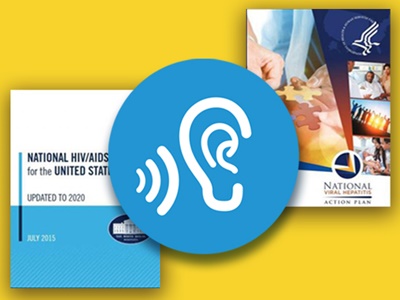 During a virtual listening session on January 29, stakeholders from the HIV and viral hepatitis community offered extensive input on the development of the next versions of both the National HIV/AIDS Strategy (NHAS) and National Viral Hepatitis Action Plan (NVHAP), which will shape U.S. HIV and viral hepatitis policies and goals after 2020. HHS's Office of HIV/AIDS and Infectious Disease Policy (OHAIDP) facilitated the session, which included more than 330 people or groups on the line. The participants included health department heads, physician educators, advocates, researchers, staff from community health centers and Ryan White HIV/AIDS Programs, among others. According to HIV.gov, the listening session participants made recommendations on the following topic areas:

People who wish to submit written comments on the next iterations of NHAS and/or NVHAP may still do so, provided their comments are received no later than 5 p.m. Eastern Time on March 11. Electronic responses are strongly preferred and may be addressed to HepHIVStrategies@hhs.gov. Hard copy responses should be addressed to: U.S. Department of Health and Human Services, 330 C Street, SW, Room L001, Washington, DC 20024; Attention: HIV/Viral Hepatitis RFI.

A special supplemental issue of the journal Public Health Reports is devoted to research and opinion about the multi-year Care and Prevention in the United States (CAPUS) Demonstration Project. CAPUS, which is led by CDC and funded by the Secretary’s Minority AIDS Initiative Fund (SMAIF), “was designed as a direct response to the disproportionate burden of HIV disease and worse health outcomes among racial and ethnic minorities,” according to CDC. The supplement’s 11 research articles and commentaries describe CAPUS strategies to address socioeconomic, clinical, and other barriers that prevent persons living with HIV from progressing along the HIV care continuum.

The CAPUS journal supplement “records an important collaboration by federal agencies and state health departments to uncover new pathways to meet the healthcare needs of racial and ethnic minorities with HIV,” according to Eugene McCray, director of CDC’s Division of HIV/AIDS Prevention. “We hope this issue provides fresh ideas to encourage new collaborative efforts to help end HIV.” A digital copy of the special supplement is available for free.

New Short Explainer and Docu-Style Videos from Greater Than AIDS

The Greater Than AIDS initiative has recently posted more than 40 new #AskTheHIVDoc videos about HIV care and treatment. These one-minute FAQ-style videos are designed to help people living with HIV and loved ones navigate the process from their initial HIV diagnosis to becoming connected to care and keeping up with their treatment. “We all need help at some time,” notes David Malebranche, an HIV clinician-researcher who is a presenter in some of the new videos. “Ask for help, find a support network, tell your medical provider what’s going on so you can problem solve together.” The videos cover the basics of HIV treatment – why it matters, how it works, when to start – as well as approaches for getting into care and finding support. In the videos, Malebranche also explains key terms, such as CD4 and T-cells, viral load, and undetectable.

Another recent set of videos from Greater Than AIDS features young people sharing their journeys from diagnosis along the HIV care continuum. “The docu-style videos educate about the health and preventive benefits of treatment, as well as the financial aid and support services available through the Ryan White HIV/AIDS Care and AIDS Drug Assistance Program, to help close the gap of those living with HIV but who are not connected to care,” according to the Kaiser Family Foundation, which directs Greater Than AIDS.

New and Updated Fact Sheets from CDC and AIDSinfo

HHS’s AIDSinfo resource pages include three recently updated consumer fact sheets about living with HIV.  Each fact sheet includes a summary of key points and links to additional information and resources. Spanish-language versions of the fact sheets have also been posted on the infoSIDA site.  The updated fact sheets are:

Digital Tools and Tips from HIV.gov

During the past few weeks, HHS’s HIV.gov blog site has published two new posts in its ongoing digital marketing and outreach series. The series is designed to help agencies and organizations become more knowledgeable about digital tools and use them effectively in health communications.  The newest posts focus on HIV awareness days:

Instagram and Awareness Days: Success Stories from the Community – Instagram is a very popular social media platform, with more than one billion users worldwide by mid- 2018. In this post, members of the HIV community share the ways they have used Instagram to disseminate HIV information, particularly around HIV awareness days.

Social Media and Awareness Days: See What the HIV Community Has Planned – This item discusses the use of several social media to promote community engagement around HIV awareness days, including: sharing statistics and human interest stories; and using tools such as Twitter chats, Twitter relays, and live streaming on Facebook.

2019 Conference on Retroviruses and Opportunistic Infections

As this issue of In Brief went to press, the 2019 Conference on Retroviruses and Opportunistic Infections (CROI) was under way in Seattle, Washington.  For persons interested in following news from CROI, we recommend the following websites:

The next issue of In Brief will provide extensive coverage of the 2019 CROI.